A bar named for the sprawling slums of Rio seems strange when you consider its location in one of the world’s most expensive real estate markets. It’s a bit like calling a bar in Monaco ‘The Flint Watering Hole.’

Name aside, the fact that this the bar, which thrived during the World Cup four years ago in the same location at Wythe and South 5th, still remains in business is a bit of a miracle. Or the result of some very wealthy investor group.

The boutique Brooklyn bar game is vicious, likely even more ruthless than the Darwinian restaurant ecosystem in the city overall.  Throughout NYC, eighty percent of restaurants close within five years, usually because of rent.

I haven’t been to Miss Favela since the 2014 World Cup, and at that time I didn’t even make it inside.

Back then, I showed up at the restaurant about twenty minutes before a Saturday afternoon Round of 16 game between Brazil and Chile. As I approached, I noticed a huge crowd of canary-clad Brazil fans. I didn’t realize they were waiting in line and I got called out by a bouncer with a referee’s whistle when I tried to walk through the door.

This time, I showed up around halftime and encountered a much calmer bouncer. I still couldn’t get inside though.

The bar was packed and a few dozen people stood outside a large open window to watch the game on TV.

Others congregated on the front door stoop and, for much of the match, I joined them. I stood at the threshold next to the bouncer and in front of a cynical Brazilian woman accompanied by her Peruvian boyfriend, himself disappointed by Peru’s failed tournament.

The servers all dressed in yellow t-shirts with the bar’s name on the front and Brazil written across the back. They each rooted for Brazil. Indeed some even emigrated from Brazil.

The bouncer, however, wore black.

“Who are you rooting for?” I asked him.

“Whoever plays Brazil,” he responded.

There is no joy in Mudville, or wherever I have elected to watch matches.

“Because when Brazil wins, everyone stays longer.”

The bar opened at 7:30 that morning and by 9, young men sat at a table sipping Cerpa. But no one seemed in a mood to party. Costa Rica stifled Brazil throughout the second half, creating tension among the players on the pitch and the fans in the bar.

Neymar received a yellow card for punching the ball into the ground a minute after VAR refused to reward his dive with a penalty kick. Coutinho got a yellow card for yelling at a Costa Rican player and then at the ref.

And in the bar, tension manifested as relative quiet. The drums beneath the television sat mostly undisturbed as the drummers fixated on the match. The crowd groaned at missed opportunities and yelped when VAR overturned that spot kick, but they mostly stood in cross-armed silence as they watched Costa Rica’s defense somehow diffused the relentless Brazilian attack. 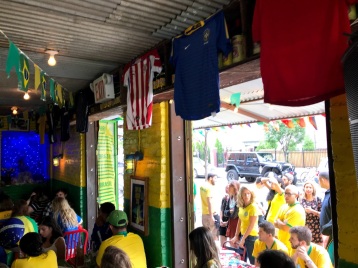 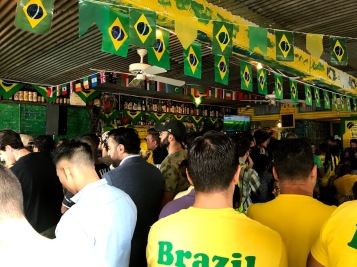 But things got better. The bouncer bestowed a blue Miss Favela wrist band, which enabled me to enter the bar. Brazil’s pressure intensified and it seemed only a matter of time until they scored.

When Coutinho finally struck, the crowd erupted with relief. A guy with an expensive camera circled the perimeter, shooting photos or videos of the celebration, though I haven’t found his content after searching online.

I was locked in leading up to the goal and I immediately announced that Coutinho had scored. But I often confuse Paulinho with Coutinho (both play for Barcelona, both have -inho names and both rate as second- or third-tier stars).

Rose said that as soon as made the call he was terrified that he identified the wrong goal-scorer.

But I was right about my call and about my choice of venue. I finally watched a “home team” win during my 2018 World Cup Tour. What a highlight.

And then I went to my job as a managing editor at a brand new newspaper until 12:30 am. Damn. The fun Friday stuff is supposed to happen after work, not during breakfast.

One cool note: There’s a billboard advertising Parquet Courts’ new album atop a neighboring building. You can see it at the top left corner of the photo that accompanies this post.

That’s a nice bit of synchronicity after I plugged their Total Football pop-up shop a few weeks ago.