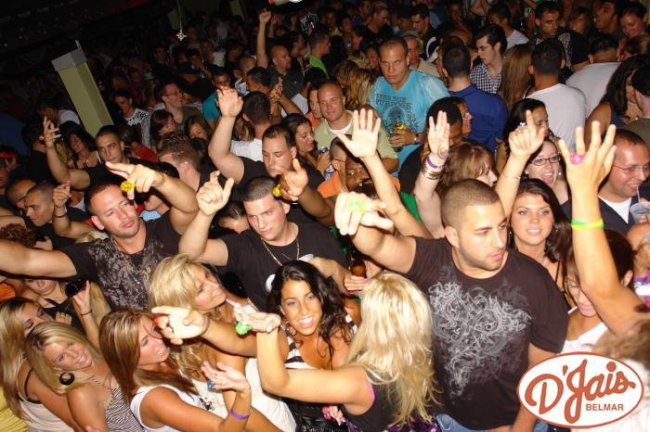 D’Jais in Belmar is many things and it appeals to many, many people. It is a rave club where house music thumps at 3 pm and a potent Vodka and Red Bull is just five bucks. It is an outdoor tiki bar providing respite from the bass. It is an opportunity to showcase the elaborate tribal tattoos you have coiling around your bicep veins. It is the epicenter of a certain type of bacchanalian youth culture glamorized by the Italian-Americans on the TV show “Jersey Shore.”

It is also, quite possibly, the single worst place to watch a World Cup soccer match in the greater NYC metropolitan area.

Katie and I were down the Jersey shore this weekend so I thought D’Jais would be a good place to see how Italian-Americans in the area would cheer for their ancestral homeland. We rode bicycles down Ocean Avenue and passed a group of young guys in Italy jerseys.

“Hey Del Piero!” I yelled. “Where you guys watching the game?”

The bass was overwhelming when we walked in. The bars were crowded. The dance floor was jammed. I saw several gigantic men squeezed into Puma’s skin tight Italy jerseys. The spandex sleeves inhibited the circulation to the their biceps, which only made their veins protrude further.

Katie and I stood at a table in the middle of the room. Soon a few girls joined us. I was talking with a girl who said she would be rooting for Italy today, though she wasn’t Italian.

“I’m an adopted Italian!” she giggled before she stepped away to twerk on another girl. She used a friend for support. It was impressive.

I fantasized that the game would start, the DJ would cut the music and everyone would focus on the televisions that lined each bar. Instead, the game started and the DJ forgot to change the channel. So we watched ABC7 Eyewitness News for about five minutes until someone reminded the DJ to switch to ESPN for the Italy v. England match.

Katie nudged me and pointed outside,. The guy in the Del Piero jersey was standing outside waving to passersby. No one was watching the game. The music seemed even louder. The staff removed all the tables. Katie and I decided to leave.

We grabbed some pizza across the street and asked the woman working the cash register for a bar recommendation.

She suggested we ride our bikes down Main Street and check out the bars in Party Town Belmar.

We finally decided to stop at Connolly Station, which had a sandwich board outside advertising “Live Audio” for the match. I photographed the sign as an older woman was exiting the bar.

“There’s an English person inside watching the game!” she told me excitedly.

I passed a group of Italians cheering at one end of the bar, sat at a stool and scanned the room trying to locate the majestic English person glaring at the Italian wankers and sulking into his pint of Newcastle.

I listened for the tell-tale accent of the native English person. Until — Ho! what’s that? Sh shhh shhh. Yes, there it is!

The English person — we’ll call him James — was sitting right next to me! Crikey!

And what luck! James was joined by his girlfriend — we’ll call her Jade. Jade was another honest-to-God English person!

For most of the match, James and Jade fended off the Italians’ taunts. A few other guys joined us. We tried to buck up the English supporters and cheer on the Three Lions. It didn’t work. England lost 2-1, a result James said he expected. It seems these two English subjects had no illusions about the strength of their squad. England just cannot compete with the continent’s best.

Katie and I ended up staying at Connolly Station and drinking with James and Jade for another few hours. A bigger crowd flowed in as the night wore on. Connolly proved a cool spot to watch the game, though I wish there were more people who cared about soccer in Belmar.

5/10 inside Connolly Station, which was a cool bar that tried to appeal to soccer fans. There just didn’t seem to be many down in Belmar.