Community amid the “humillación mundial”

The Match: Spain v. The Netherlands in a rematch of the 2010 World Cup final

I lived in Madrid and taught English in the suburb of Getafe for about a year. I arrived in Spain knowing approximately zero Spanish, but I was very cocky and figured I would pick it up in about two months, become fluent in five or six and be giving speeches to large audiences in ten.

In reality, I stumbled along for the first five months with my confidence shattered and my perseverance flagging. It was taking me a lot longer than I thought to manage a new language. Every time I learned something, I realized how much more I lacked.

People were warm and abierto, though. No one ever purposely made me feel bad about myself. The Madrileños encouraged me to keep trying. My fellow teachers were great. So were the parents of the kids I tutored. They welcomed me into their homes and gave me snacks and Euros just to chat with their kids. I had supportive bohemian roommates and I met men from all over Spain and Latin America playing basketball near my apartment.

I immersed myself in Spanish soccer culture so that I could at least speak well on one subject. Soccer replaced the weather as my go-to small talk topic. I read Marca.com and the morning Metro newspapers every day. I attended several Atletico Madrid games. I took a pilgrimage to Camp Nou and watched Messi and Villa score against Osasuna with 90,000 other fans from around the world. I was walking around Vallecas, a working class, leftist neighborhood in Madrid, when Rayo Vallecano achieved promotion to La Liga.

My fondest memory of soccer in Spain was the moment I entered the stands at the Santiago Bernabeu to see Spain play Colombia. The atmosphere is difficult for me to describe. I felt surrounded by a wall of noise and motion. It was the loudest sporting event I have ever been to. It felt like a rock concert with general admission seating because people spilled into the aisles throughout the upper deck and the crowd never simmered. Even the horde of Colombian fans brought energy so that every play was met with cheers. And that was just a friendly between two countries from different hemispheres!

The USA is my favorite team of course, but Spain is my second. I have been eager to see them in the World Cup for years! As un hincha de Atletico, I was pumped that Diego Costa got to start against Holland. I think Juanfran should have been at right back as well, but at least we got one member of the 2014 La Liga champs in there.

My girlfriend Katie and I selected La Nacional as our spot to watch the game. After I was boxed out of two Brazilian restaurants yesterday, I figured we had to arrive early to get a spot. We got to La Nacional around 1:30 for the 3 pm game. Fortunately, few people had arrived and the staff was setting up a party room upstairs. They had rows of chairs facing a large projector screen as well as a cool bar serving Mahou and Estrella Damm.

Katie and I elected to to sit downstairs and lunch on some delicious bacon-wrapped dates and garlic shrimp, some average croquetas and a standard ensalada mixta. There was a large map of Spain in the corner near the projector screen, several paella pans hanging in the kitchen, photos of Spanish landmarks on the walls and plenty of Spanish beers available. La Nacional could be a bar in Madrid’s La Latina neighborhood, though Madrid bars generally have just one type of beer.

Before the Match (Katie and me): 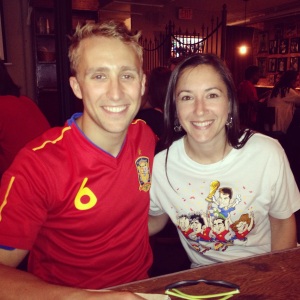 After the match (from Marca): 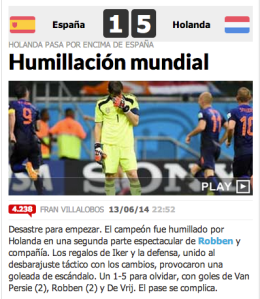 Woops. Well, I was hoping to find some community among Spanish expats and American Españaphiles. The catastrophe on the pitch, plus the Mahous and tinto de veranos, provided the social lubrication.

So far, I have met several interesting people during this project. It seems that international soccer events in NYC attract cool, worldly, fun individuals.

My new friend Sanam was already at La Nacional when I arrived. She invited me to watch Iran v. Argentina on Sat., June 21 with her Iranian contingent. I’m eager to see how they support their team.

Our waiter, Quim, was from Barcelona. He was probably the most handsome man I have met in 2014 and he would have fit nicely along with Xabi Alonso, Iker Casillas and Sergio Ramo — pretty much the entire Spanish squad actually — in a GQ photo shoot. For further evidence that the Spanish National Football Team is the world’s most attractive group of men: young women at our table screamed “He’s so hot!” every time the slo-mo cameras focused on Ramos or Casillas and Katie kept joking about the men running around in their wet, white kits.

Quim predicted that Spain would advance to the World Cup semifinals, but like the Brazilian fans yesterday, he didn’t think his home country would win it all.

Katie and I sat at a wooden folding table across from another couple, Pule from South Africa and Hannah from the USA. Hannah, who wore a Euro 2012 t-shirt, works in international development, lived in Spain and is a big fan of La Furia Roja. She said she and Pule went to the Confederations Cup final last year and that she bravely wore a Spain shirt inside the Brazilian stadium.

Pule, a rugby player, said Hannah was turning him into a bigger soccer fan and that he went to several World Cup matches in his home country in 2010. I asked Pule about the social impact of that event. “We went through the same things” as Brazil seems to be experiencing (e.g., social unrest, concerns that the stadiums wouldn’t be ready), but he said, the tournament was “epic” and in the end “everything came together very smoothly.”

Pule did not seem to represent the poor citizens of South Africa’s townships, but it was nice to hear his positive take on his country’s tournament.

He also explained to me that he will be rooting for Ghana this year. In fact, he said he supports all five African teams at the World Cup. I told him about my affinity for Asomoah Gyan.

Shortly before the game started, a guy walked in wearing a Holland jersey and bright orange fedora. His name was Victor and he seemed like a shit-stirrer.

“I hope I don’t have problems,” he told me as he surveyed the room of red-clad Spanish fans. “But I hope it gets a little rowdy.”

Victor ended up being the only rowdy one. Here he is waving his fedora in the air after another Dutch goal:

Just before halftime, Sebastien, the Argentine in front of me, and his friend from Spain stepped outside to smoke. They left their pack on the table:

So in the long run smoking kills, but in the short-term, smoking makes you miss the goal of the tournament (see Robin Van Persie: golazo).

When he returned, I explained how RVP had scored in Spanish. Sebastien seemed distraught. His family lives in Madrid. His reaction set the tone for the rest of the match. Casillas sucked. Spain never settled into their tiki taka style. People were sad.

Yet, I had fun! At least, RVP’s header was a “Holy Shit. Que Golazo! Text-your-friends-and-family level” goal.

The more people drank, the more they spoke to me in Spanish. One lady even told me “Hablas muy bien.” That compliment is enough for me to raise La Nacional’s ranking a notch of two. That’s a half-joke. I have some serious issues with how strangers perceive my ability to speak Spanish. I should probably sort that out with a therapist.

One last note: I ran into a girl named Amy who I went to college with. She also taught English in Spain and she prepared for the game the night before:

OVERALL ATMOSPHERE: 8/10 Inside La Nacional. The fans, including our waiter, were welcoming, friendly and interesting. There were several Spanish people in the house in addition to many local Españaphiles. The food was tasty and authentic. People took the loss in stride. Yo volvería a ver mas partidos aquí.