The Match: Belgium 2 – 1 USA, the end of the line for the US Men’s National Team 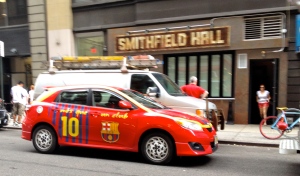 Before the USA/Portugal match, my friend told me he had some misgivings about rooting for the USA in the World Cup. He said he felt uncomfortable cheering for a superpower to defeat developing nations. He asked me to explain why I support the US Men’s National Team.

My initial reaction was “I root for the USA because I’m from the USA.” But that’s a rhetorical fallacy along the lines of “USA: Love it or Leave it.” There are plenty of things the “USA” does or promotes that I don’t support. To whit: current immigration policy, the regressive tax system, the death penalty, etc.

So I thought about it more and here’s what I realized:

I love the USMNT because I feel like I can relate to the players. We are all around the same age and many of them grew up in similar circumstances as me. They also played local club and high school soccer. I’ve never played against anyone on this World Cup squad, but I’ve played with future pros and some guys who have been in or near the USMNT rotation. They are, of course, way better than me, but they weren’t christened Stars when they were eight like most of the Europeans or South Americans.

DeAndre Yedlin, for example, played in high school in Seattle then spent a year at Akron. Before Yedlin made the USMNT roster, he earned $80,000/year for the Sounders. That’s a nice salary for a 20-year-old, but it’s far from the $19.7 million/year that Eden Hazard, 23, earns at Chelsea. Yet, there was Yedlin streaking up and down the right wing, taking on Belgian superstars and sending crosses into the box before sprinting back on defense.

I imagine many people in the crowd at Smithfield Hall feel the same connection to US Soccer that I do. The bar was jammed with young men and woman who left work early to watch the match with Belgium. There were a few middle-aged people inside, but the average age seemed to be late-20s/early-30s. We are a generation that grew up playing and watching soccer. The Metrostars, including Tim Howard, came to our tournaments to sign autographs. This US team is the cream of our Soccer Generation.

Smithfield Hall is one of NYC’s preeminent soccer bars. Each weekend, It hosts the the local fan clubs for Bayern Munich, Manchester United, Valencia, Inter Milan, Barcelona and a few others teams. When I arrived, an FC Barcelona car was parked outside. I was excited to visit a place that attracts serious soccer fans.

While I waited for my friend Mike to arrive, I scanned the scene and spotted several US Soccer t-shirts and various iterations of USA jerseys, including this ‘94 denim number. Many people, like me, paired their USA soccer apparel with their work slacks. One hipster wore a Helvetica & t-shirt that listed members of the 2010 World Cup roster. I love those shirts.

Smithfield Hall features a rustic wooden bar and a minimalist design. Large CBS studio lamps and small bulbs in metal cages cast a dim glow on the weathered white paint of the walls. The flags of each nation left in the Round of 16 were attached to the wall above the bar. When a country is knocked out of the tournament, their flag is removed.  The rest of the bar lacks much decoration except for the back room, which has a few shelves lined with vintage sports memorabilia.  It’s the kind of clean, modern-rustic fusion you might find in a Bushwick condo owned by a successful couple with disposable income and an eye for interior design.

The bouncer, built like a comic book superhero, stopped letting people into Smithfield Hall about a half hour before the match. He loomed near the door and presided over a growing line of anxious fans as he devoured grilled chicken to fuel his pecs. Flustered guys kept zipping to the door to meet their friends on the outside. I feared the bouncer would prevent my friend Mike from entering, but he was a benevolent bodybuilder and let Mike in. The two of us slipped through the crowd toward the middle of bar, where Mike ran into two of his former instructors, Neal and Matt. We spent the entire match with them.

Both Neal and Matt teach web development and finished class early to watch the match. They were surrounded by about 10 of their friends and their crew seemed to order a combined 200 drinks. Everyone in the bar chatted, cheered and commiserated together so it was hard to distinguish groups of friends from strangers bonding over US soccer. One thing was for sure — I could tell a bit about Neal and Matt’s personalities by observing their behavior during the match.

Neal wore his emotions on his Michael Bradley jersey sleeve and remained in motion throughout the match. He bounced from friend to friend, offered analysis, debated substitutions, squeezed my arms after several spectacular Tim Howard saves and held his friend Megan through the end of regulation. When Chris Wondolowski blasted the ball over the bar in the 93rd minute, Neal dropped to the floor. I also collapsed into a crouch and clutched a stool for support. ‘That was the moment Wondolowski was waiting for! He was in the game to poach a goal off exactly that type of loose ball!’ Neal and I shouted. We shared this sentiment with every other person in the bar in addition to every soccer fan and commentator in America.

Meanwhile, Matt was Neal’s stoic opposite. Matt stood with his arms folded across his t-shirt and stared intently at one of the TVs above the bar. He occasionally offered insight or answered a question, but he was generally focused. He didn’t take things too seriously, however. When Megan ordered a Leffe from the bartender, Matt stopped her.

“Isn’t that a Belgian beer,” he accused. We laughed and Megan ordered a Guinness instead.

Although a few people around us did not seem very interested in the match, I noticed many others who concentrated as hard as Matt. Their impassivity faltered whenever they nibbled their finger nails or gripped their chins.

Sam’s Army posted up in the back of Smithfield Hall and led the cheering. Their rendition of the national anthem drowned out the surround sound and they quickly commenced the USA supporters’ hymns like “Everywhere we go” and “Seven Nation Army.”

This was a great group of fans to share the game with. I went to a different spot for the four USA World Cup matches. Each setting provided me with the community, support and perspective I needed at that time.

I watched the USA defeat Ghana at Harlem Tavern, which was split evenly between USA and Ghana supporters. That was fun because the tournament was fresh, the crowd was very energetic and the USA won. The friendly rivalry between the two groups of supporters made the match more exciting. Someone was always cheering.

I watched the USA tie Portugal with several friends at Kent Ale House in Brooklyn. I was among many close friends with whom I could commiserate. The support we provided each other softened the blow of Portugal’s last second goal.

I watched the USA lose to Germany but advance to the Round of 16 in a community room at the supportive housing site in Harlem where I work. I organized a viewing party, though few of my clients care about soccer.  Most came to the party for the free pizza and the opportunity to socialize. I was nervous throughout the game, but I act professionally. My clients helped me manage my emotions and put the match in perspective.

Most fans inside Smithfield Hall were knowledgeable members of the Soccer Generation. They were passionate about the USMNT and they understood that the team played as hard as it possibly could against Belgium, a team of superior talent. They valued Tim Howard’s world-class performance. They seemed to know that you can’t make the  ‘GODDAMNIT WONDO. YOU HAVE ONE JOB AND THAT’S POACHING GOALS’ argument to claim the US could have won the match when Belgium missed like 40 more clear, Wondo-like chances. Belgium was bound to score eventually. It just took Beast Mode RomeluShawn Lynchkaku to obliterate Matt Besler and make it happen.

I think most of us recognized how well DaMarcus Beasley and DeAndre Yedlin played up and down the wings. Yedlin was so cocky with the ball in the attacking third. he consistently beat Belgians to the endline. I’m sure European clubs will try to pry him from Seattle this summer.

Finally, we valued Michael Bradley’s contributions to the game. Howler put it beautifully a few days ago:  “In essence, for Bradley, it is a 90 minute series of thankless, often off-camera wind-sprints. In the World Cup. In suffocating heat.”

The fans around me at Smithfield Hall understood that. We applauded at the end of the match because the USMNT gave everything they could and came up short. Yedlin and Julian Green, the youngest players on the team, left their mark on the match and showed us what’s in store for the US at 2018 World Cup. I’ll come back to Smithfield in four years to watch Green hammer in some more volleys.

OVERALL ATMOSPHERE: 8.5/10 for a bar full of knowledgeable US Soccer fans, proud members of our nation’s Soccer Generation.